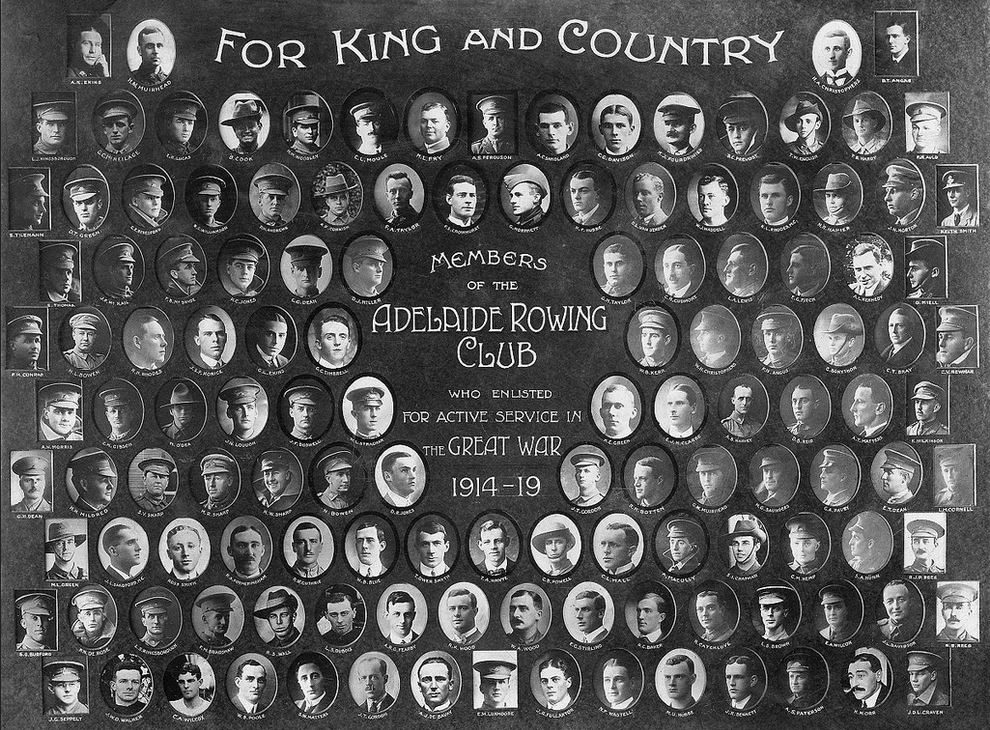 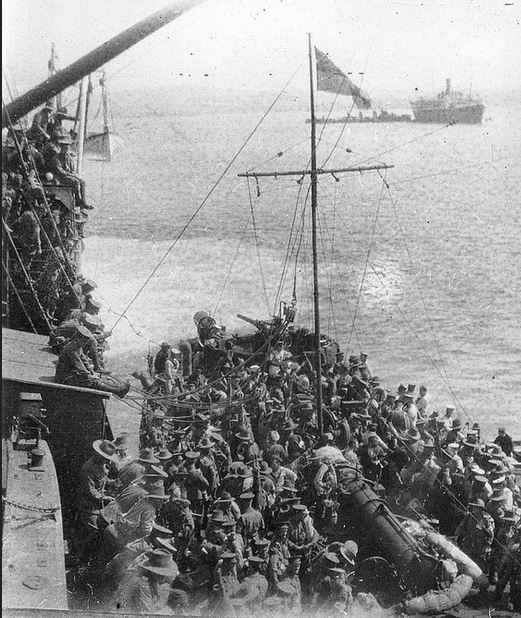 Troops from South Australia disembarking on to a small vessel from a transport ship before landing at Gallipoli, Turkey during World War I. 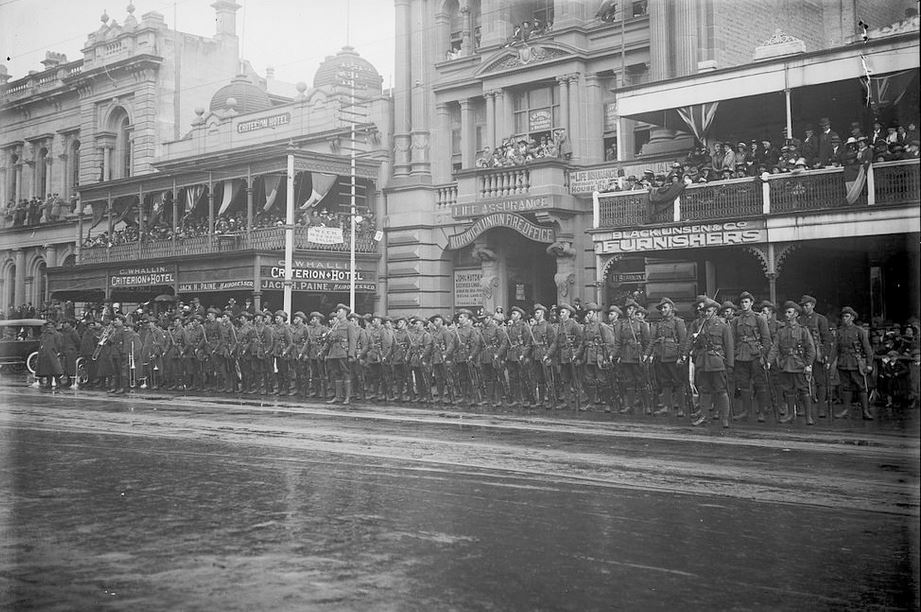 Australia Day procession, King William Street, Adelaide. Opposite the saluting base there was "a street guard of 100 men from the 10th Reinforcements of the 50th battalion, under Lieutenant Fendler. The Mitcham Camp Band played the troops past." The Advertiser newspaper 28 July 1917, page 7.   PRG 733/352 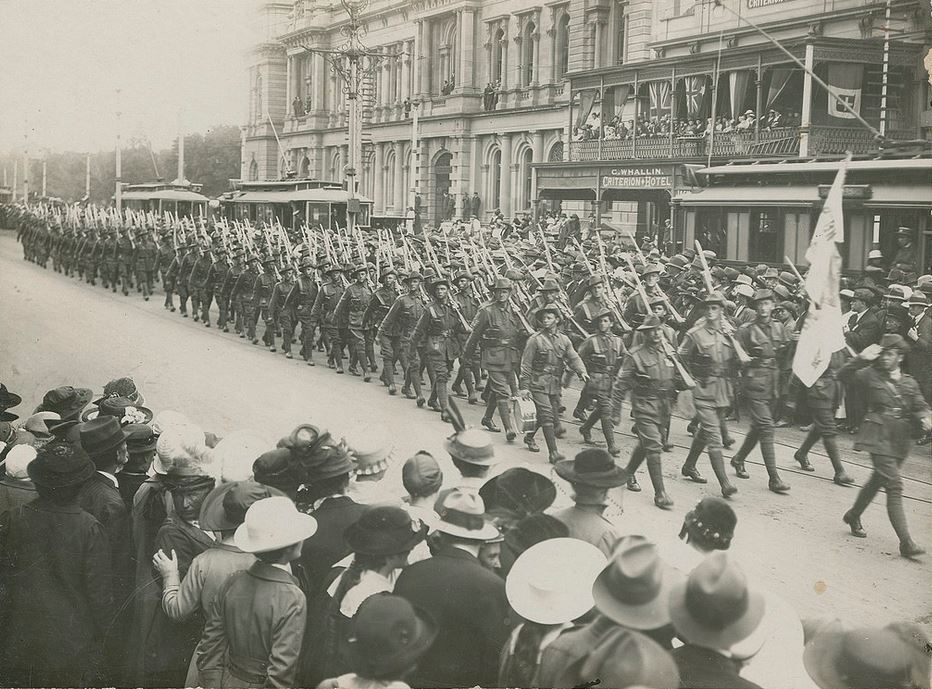 A column of soldiers marching north down King William Street past the Criterion Hotel and the General Post Office. A soldier behind his commanding officer, giving the salute, holds his battalion's colours. Crowds are watching from the street edges and flags are flying from the Criterion's balcony verandah. (C. Whallin was publican of the Criterion Hotel from 1914-1920.) Two tramcars can be seen in front of the GPO. A researcher has suggested that this is the 20th Reinforcement of the 27th Battalion, and that the officer at the front of the column is Lieutenant John Lindsay Ross.  PRG1361/20/10

Large group of officers and men of the 11th Australian Field Ambulance photographed in 1916 on Salisbury Plain, Wiltshire, England, prior to their departure for active service in France. All other ranks soldiers are wearing the Red Cross patch on the right arm of their uniform. Herbert Bindley Hussey is one of this group.                PRG  1446/1/3/6 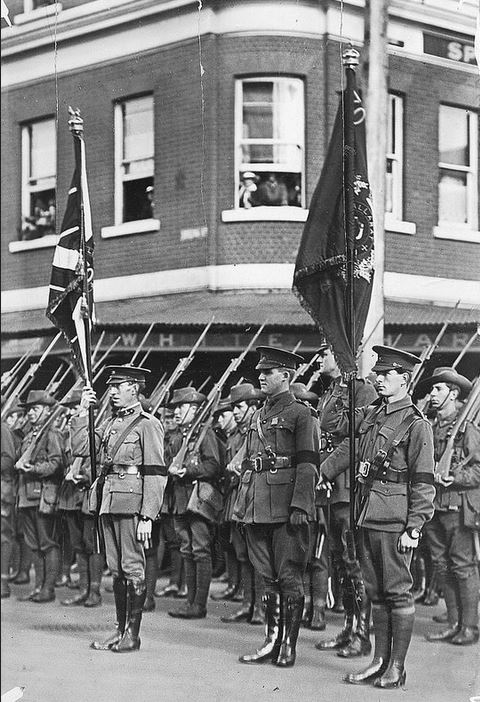 Lieutenant William Dunstan, late of the 6th Reinforcements 7th battalion A.I.F., standing between two color bearers during presentation to him of the Victoria Cross by the Governor-General of Australia at Federal Parliament House, Melbourne, on 9 June 1916.  PRG 280/1/23/393 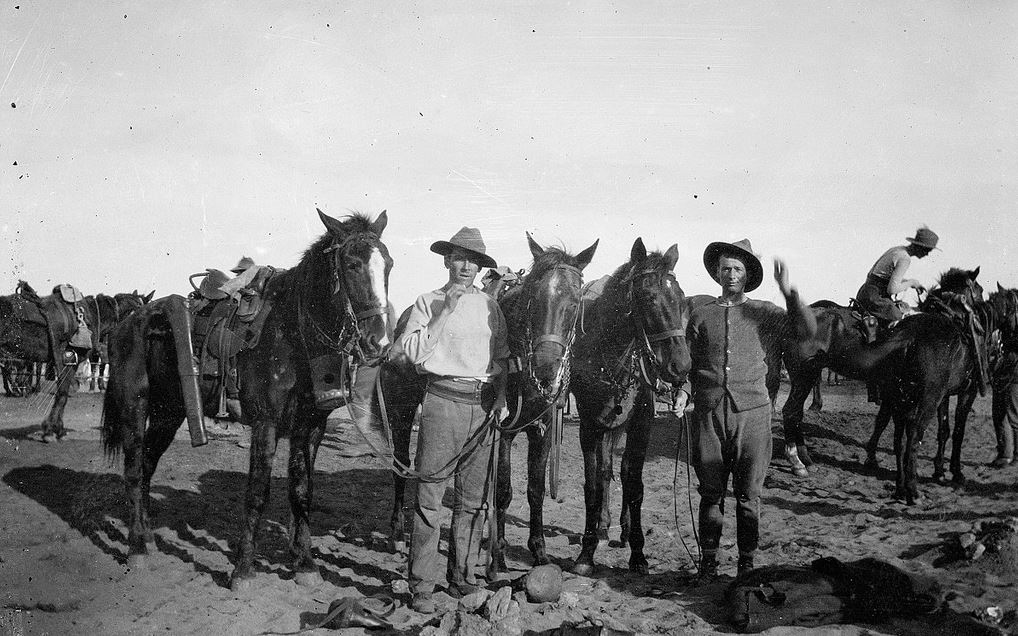 Two soldiers standing with some of the Light Horse mounts. Note on back: 'Three of our best horses. I took them the day we handed them over'.
SRG  435/1/205 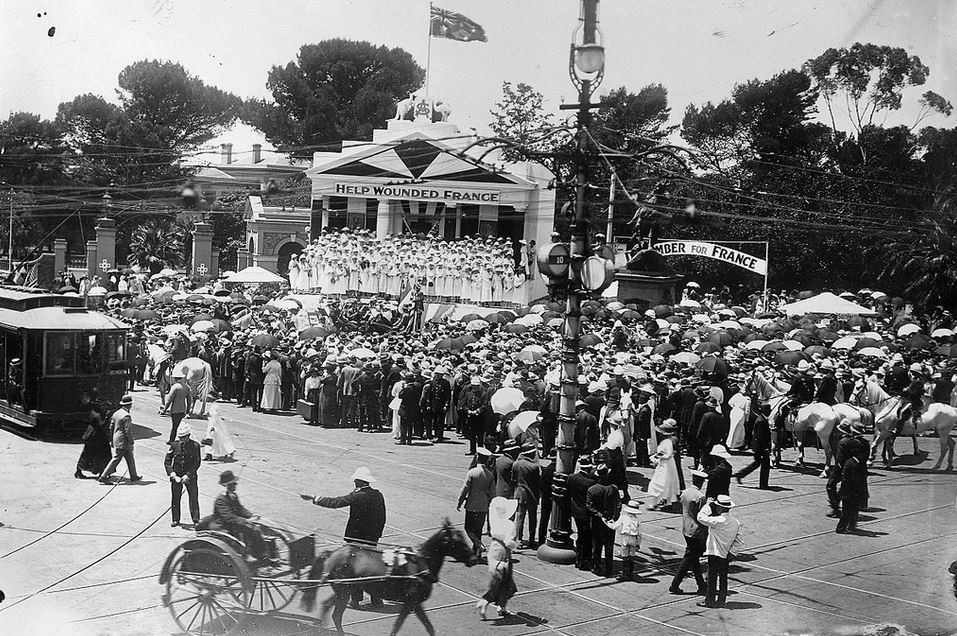 A crowded stage at the 'Bank of Thrift' erected at the entrance to Government House in Adelaide during World War I for the purpose of raising funds for the war effort; a large crowd watches proceedings as they are asked to help the wounded in France.   PRG  280/1/15/237 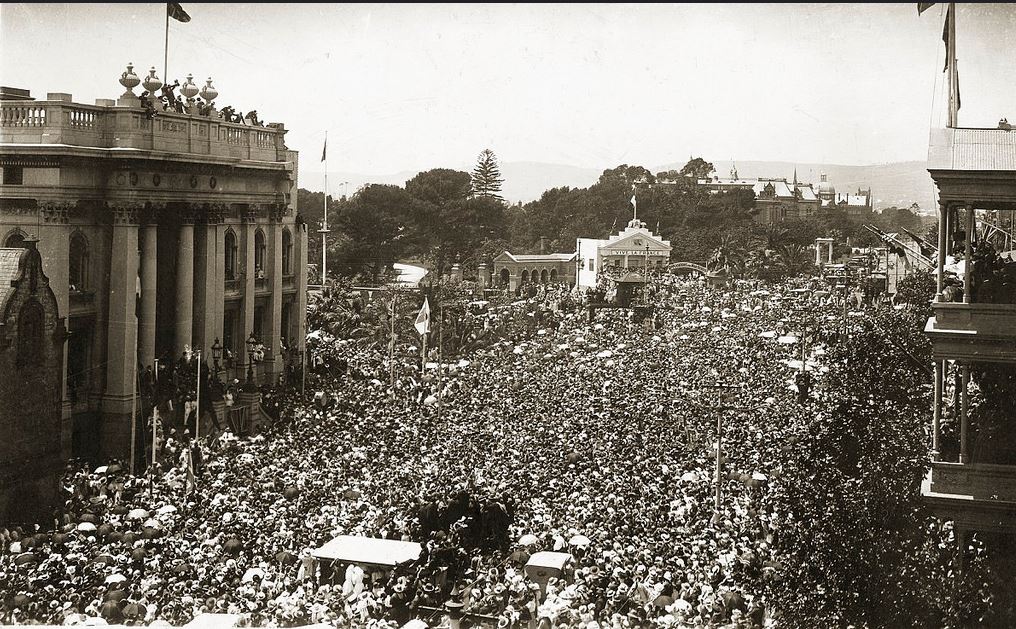 A mass of people have gathered in front of Parliament House to hear the Armistice Day address of His Excellency the Governor of South Australia. Members of the French Mission are also present and Colonel Baron d'Andre is to speak. The Bank of Thrift, displaying the phrase "Vive le France", can be seen in the distance. On the right are the balconies of the South Australian Hotel.    B4633 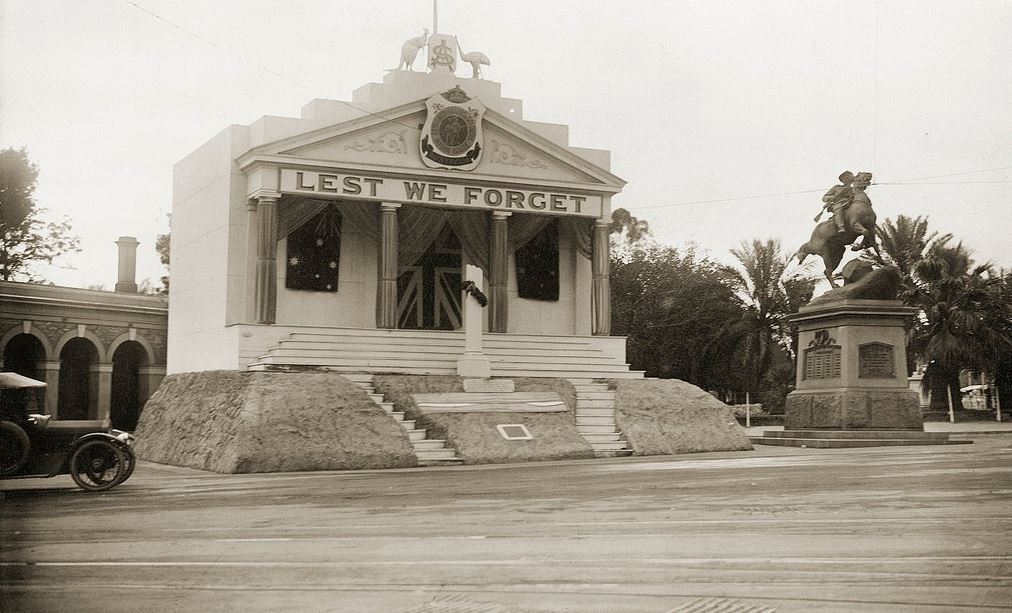 Bank of Thrift, North Terrace, taken in April, 1919. It was erected in front of Government House gates in order to facilitate the flotation of the War loans. It was demolished before July 1920.     B2748 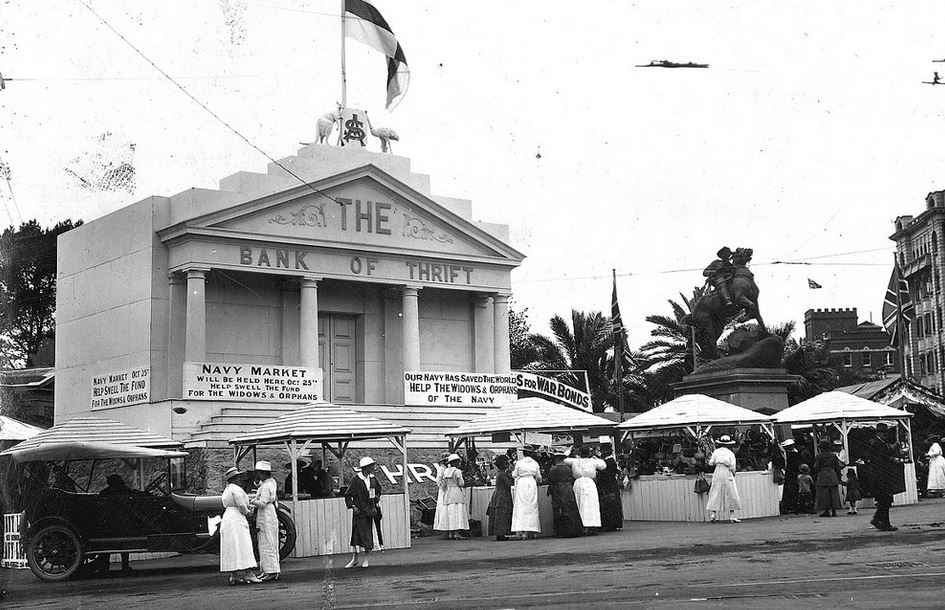 Fund raising for Navy Day held at the Bank of Thrift which was erected by the gates to Government House, Adelaide, during World War I as a focus point for supporting the war effort, three large signs urge people to '...help the widows & orphans of the Navy'; the South African war memorial can be seen on the right.   PRG  280/1/25/183 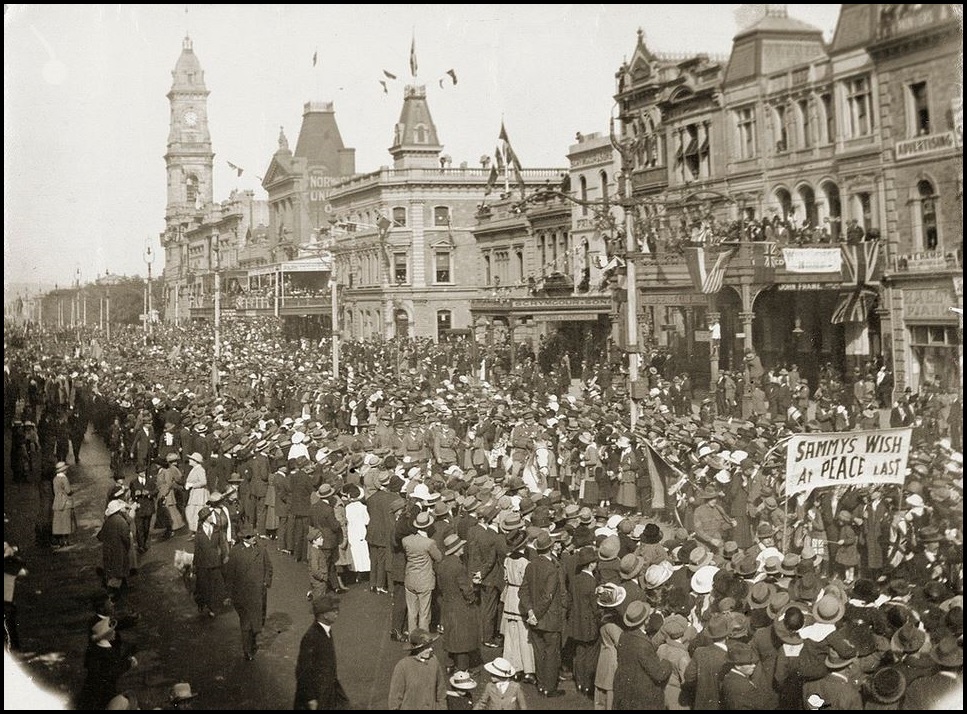 Peace Day, King William Street. Huge crowds line the street during the Peace Day Parade held 19th July, 1919.
The procession of soldiers marching are from the 10th and 27th Battalions.
During the day athletic championships for soldiers were held, along with fireworks and 50 bonfires lit by the Boy Scouts. The chain of fires could be seen from the hills of Mitcham to Tea Tree Gully.
A large banner held by the crowd reads 'Sammy's wish, peace at last'; referring to the Sammy Lunn, who raised funds for South Australian troops during World War One. Flags are flying from the buildings along King William Street.
B5211 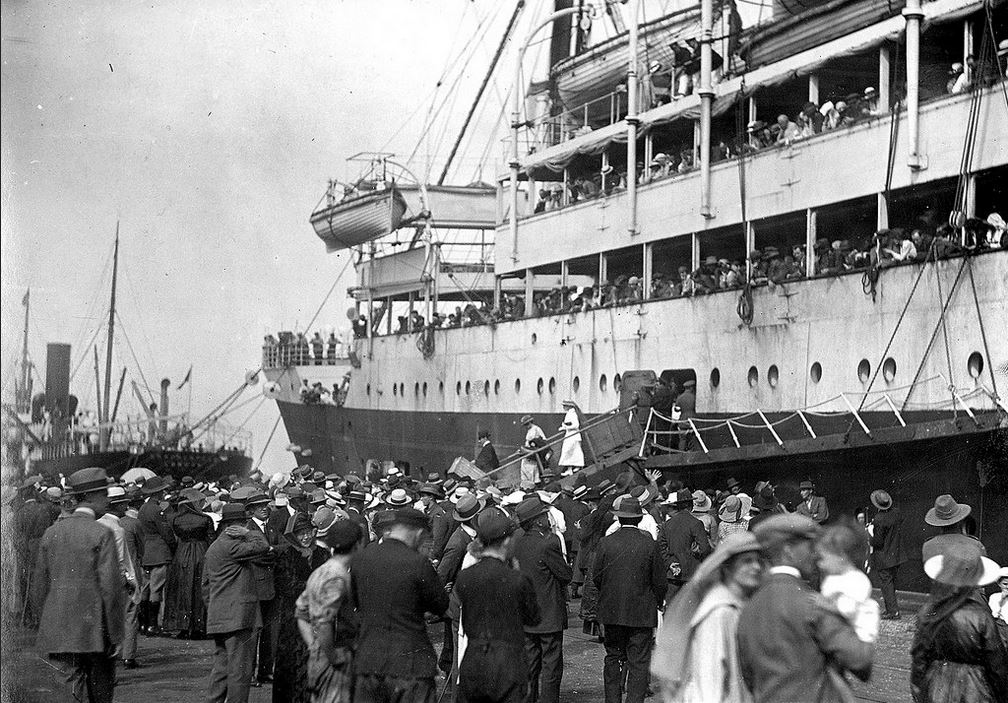 Crowds waiting on the wharf at Outer Harbor, South Australia, welcoming a ship carrying troops returning from service overseas during World War I. 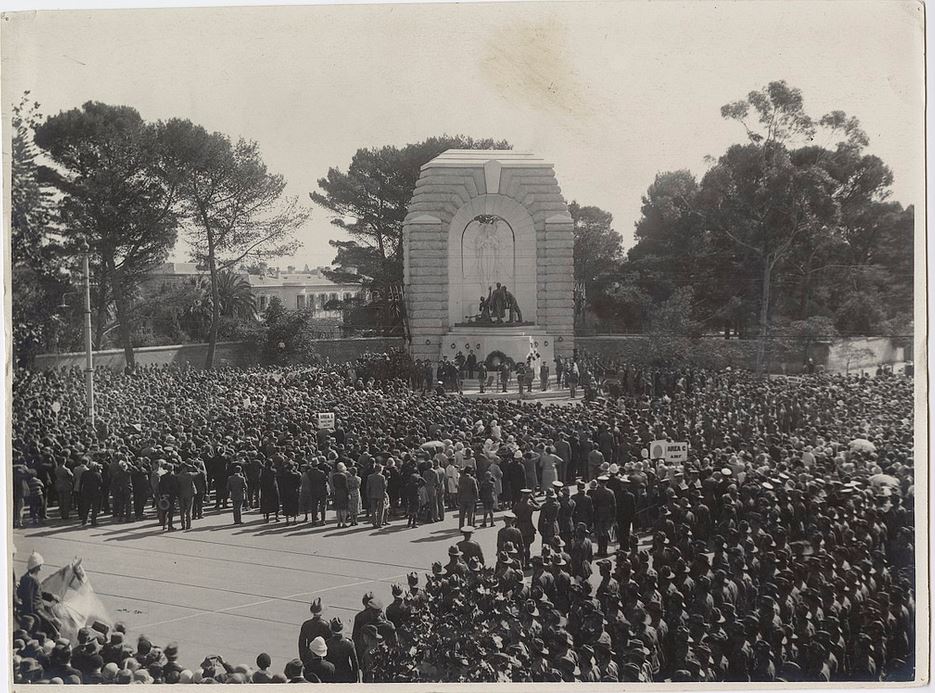 A large group of soldiers and civilians attend the ceremony at the new National War Memorial, Adelaide, on Anzac day, 1931.
The police greys are in attendance (bottom left corner) and part of Government House can be glimpsed amongst the trees in the background.
The Memorial was designed by Walter Bagot and Louis Laybourne-Smith (of the firm Woods Bagot) and built by Tillett and Son. The detail of the marble angel and group of bronze figures was the work of Sydney sculptor George Rayner Hoff.
[On back of photograph] 'April 25th, 1931 / Sounding the Last Post at the ceremony of unveiling the War Memorial, North Terrace, west corner of Kintore Avenue'
B5909 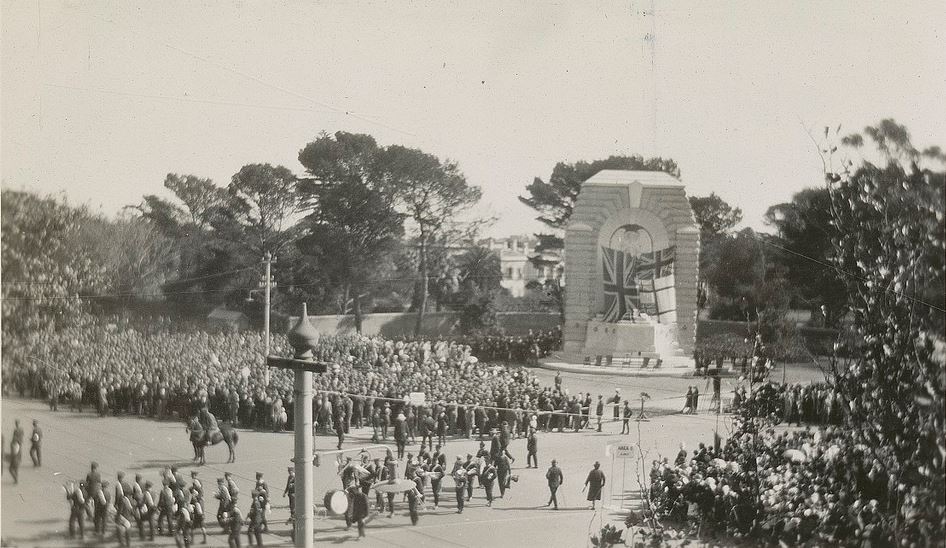